STILL continues its series of victories with the IFOY Award, and successfully received one of these coveted intralogistics trophies – namely in the Counterbalanced Truck category.

The award ceremony took place this evening in the context of the opening of the CeMAT, the world’s leading intralogistics trade fair, together with the HANOVER FAIR. Seven finalists were represented in the capital city of the state of Lower Saxony when the hitherto best-kept secret of who had won the International Intralogistics and Forklift Truck of the Year (IFOY) Award 2018 was revealed.

Unofficially, the die was already cast in February after votes had been registered by the jury, which has grown to 26 members in its sixth year and consists of experienced specialist journalists working for leading logistics media in 18 countries. The IFOY Audit extended over a week and comprised a sequence of challenging test series in which the nominated machines and systems were thoroughly put through their paces in a direct comparison with similar solutions available on the market. In particular, the focus was on hard facts as well as on innovative value, which was determined and classified by renowned representatives of scientific institutions.

In the “Counterbalanced Truck” category the new STILL RX 20 electric truck came out on top, a compact, energy-efficient model range with load-carrying capacities from 1.4 to 2,0 tons. The intralogistics specialists have redesigned this bestseller in the premium segment, systematically trimmed it to the demand, and provided it with numerous equipment options. The characteristic features of this exceptionally agile all-rounder available since the early 2018, which shows its strong points when used both indoors and out of doors, are its high goods handling performance - even when driving on a steep ramp – and a newly-created workstation based on ergonomic aspects.

The driving speed of the new RX 20 generation was particularly convincing in test runs. For example, the RX 20 reached a speed of up to 20 km/h, whereas conventional trucks are already slowed down at 16 km/hr. A positive assessment was also earned by the machines’ great manoeuvrability, which is achieved by using turntable steering on 4-wheel trucks.

Improvements on the driver’s cabin not only increase safety, but are also convincing with regard to comfort. Moreover, as judged by the testers, the truck is exceptionally quiet and easy to operate, all-round visibility is good and the workstation is generous and conveniently designed.

Furthermore, the RX 20 scored points with its dual battery compartment that can optionally accommodate 625 Ah batteries in an A or B circuit so the operator can continue to use existing battery pools and can exploit the advantages of the respective batteries depending on the profile of use. There was also confirmation that the truck can be driven for a period of nearly 14 hours when using low-maintenance 931 Ah lithium ion batteries, and even up to 18 hours of continuous use is possible in the economical Eco mode, which can be selected virtually just by pressing a button.

According to the summary by the specialist jurors: “In the test team’s opinion, the STILL RX 20 is the new standard in this popular segment.” Frank Dreeke, CEO of BLG Logistics Group, shares this assessment: "The new STILL RX 20 is the Ferrari in the warehouse. It is ahead of its market competition and sets the new benchmark in its class." 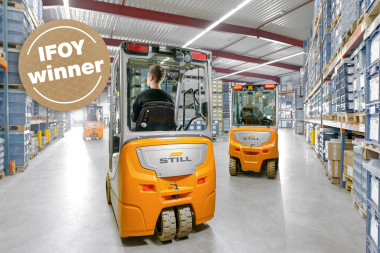